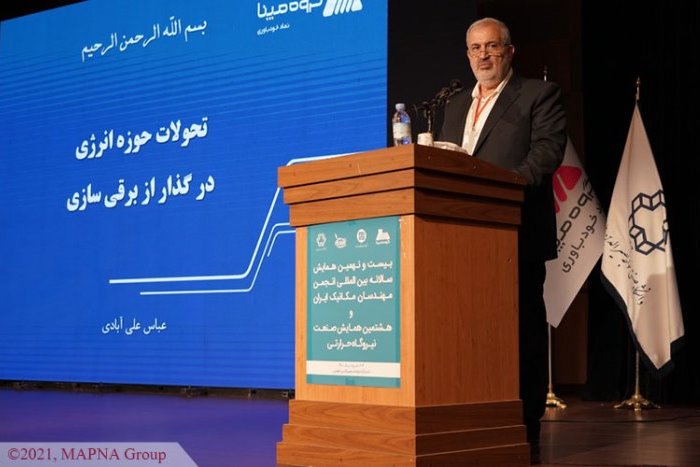 Addressing an international gathering of mechanical engineers, MAPNA Group CEO Abbas Aliabadi referred to the rapid growth of renewables, highlighting the need to gain the expertise to keep up with the heated global competition.
The 29th Annual International Conference of Iranian Society of Mechanical Engineering and the Eighth Thermal Power Plant Industry Conference opened at Tehran’s Khajeh Nasir Toosi University of Technology on Tuesday, May 25.
Aliabadi, as the keynote speaker of the event, pointed to the rapid advances in the energy sector and the transition to electrification, predicting that green energies will take a larger portion of the global energy basket in the upcoming years.
“Forecasts show that in the not-too-distant future, electricity will be the most widely used type of energy worldwide, with the transportation sector playing the major part in this transformation.”
He pointed out that the 82% drop in renewable costs over the last decade has fueled the clean energy boom, which has, subsequently, helped reduce carbon dioxide emissions.
MAPNA CEO also described hydrogen as another type of environmentally-friendly energy, which can be used on the path toward electrification.
“Electrification requires a smart network, and due to the limitations on this path, we can use hydrogen-related technologies to reach such a goal,” he said.
He added that while green hydrogen is still very much in its infancy, it has drawn attentions in many countries over the past years.
“Although the replacement of electrical storage with hydrogen is not easy in some circumstances, technological advancements and lower hydrogen production prices may make it feasible,” he noted.
He stressed that “much more effort is needed to gain the experience and know-how in this field in order not to fall behind.”
The world’s fossil fuel resources are depleting and we have no option but to come up with alternative plans for the future, MAPNA CEO said, reminding that pollution caused by these resources has posed serious challenges to human life.
Electricity and hydrogen are environmentally and climatically clean along the entire length of their respective energy conversion chains Aliabadi stressed.
In recent years, following a government policy to shift from fossil fuels to green energies, MAPNA Group has prioritized the development of EV infrastructure.
The Group has forged deals with major Iranian carmakers and municipalities to develop urban EV infrastructures. Manufacture of electric locomotives is another MAPNA initiative toward electrification of railway industry.
The 29th Annual International Conference of Iranian Society of Mechanical Engineering and the Eighth Thermal Power Plant Industry Conference will wrap up on Thursday, May 27.
Co-hosted by MAPNA Group and the Iranian Society of Mechanical Engineering (ISME), the three-day congregations serve as platforms for exchanging the latest scientific and technological achievements in construction of thermal power plants.