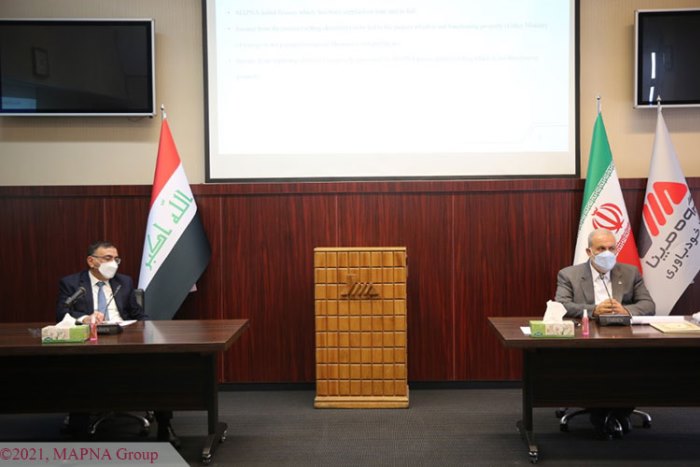 Iraq’s Electricity Minister Majid Mahdi Hantoush visited MAPNA Group in Tehran on Sunday, May 2.
Heading a high-ranking delegation, Hantoush met with MAPNA Group CEO Abbas Aliabadi and a number of senior managers of the Iranian conglomerate to discuss issues of mutual interest.
During the meeting, Aliabadi stressed that MAPNA attaches great importance to its collaboration with Iraqi partners in energy projects and eyes a stronger presence in the neighboring country’s market.
He also pointed to MAPNA’s participation in a number of current and past energy projects in Iraq, including steam power plants, and underlined his group’s readiness to broaden cooperation with Iraqis in various fields, including oil and gas, and rail transport, as well as the health sector.
Khalil Behbahani, CEO of MAPNA Group Investment Division, who was also present at the meeting, delivered a report on MAPNA Group’s participation in Iraq’s electricity projects, and expounded on the projects’ status, existing challenges, solutions and ways to boost the joint collaborations.
The Iraqi Electricity Minister, for his part, referred to his country’s interest to boost power output, with a focus on green energies.
Hantoush referred to MAPNA Group’s considerable capacities in the power sector, especially the construction of wind and solar farms, and invited the Iranian side to invest and participate in the development of clean energy infrastructure in Iraq.
Mapna Group has played an active role in the development of Iraq’s power plants since the late 2000s. the conglomerate participated in the construction of Al-Sadr 324MW Power Plant in Baghdad and Al-Haidariya 162MW Power Plant in Najaf.
MAPNA Group is responsible for the design, procurement, transportation, installation, and commissioning of the 3000-MW Rumaila Power Plant, which is currently under construction on the outskirts of Basra in southern Iraq.
The Al-Sadr megaproject’s first phase, which includes six gas-fueled units that run on MAPNA’s MAP2B turbines with an aggregate capacity of 1098MW, has been completed.
The next phases of the project are currently underway, and include six similar gas-fueled units and six steam units;
Once completed, the 2-million-Euro project will transform Al-Sadr into a combined-cycle power plant.